Swimming - The Way To A Toned Body!

Swimming is the use of arms and legs to move one's body through water. Swimming is an individual or team sport. If not pursued at a sport level, swimming is the perfect exercise to sculpting a toned body.

Stretch your swimming muscles and clock some fast laps in the pool! The pool at Fun Stop has a uniform depth of 6 feet, and is restricted to only swimmers.

Have you tried out the following swimming techniques yet?

Front Crawl - The front crawl or forward crawl, also known as the Australian crawl or American crawl, is a swimming stroke usually regarded as the fastest of the four front primary strokes.

Trudgen - The trudgen is a swimming stroke sometimes known as the racing stroke, or the East Indian stroke. It is named after the English swimmer John Trudgen (1852–1902) and evolved out of sidestroke.

Butterfly Stroke - The butterfly (colloquially shortened to the fly) is a swimming stroke swum on the chest, with both arms moving symmetrically, accompanied by the butterfly kick (also known as the "dolphin kick"). While other styles like the breaststroke, front crawl, or backstroke can be swum adequately by beginners, the butterfly is a more difficult stroke that requires good technique as well as strong muscles.

Breaststroke - Breaststroke is a swimming style in which the swimmer is on their chest and the torso does not rotate. It is the most popular recreational style due to the swimmer's head being out of the water a large portion of the time, and that it can be swum comfortably at slow speeds.

Backstroke - Backstroke is one of the four swimming styles used in competitive events regulated by FINA, and the only one of these styles swum on the back. This swimming style has the advantage of easy breathing, but the disadvantage of swimmers not being able to see where they are going.

Snorkeling - Snorkeling is the practice of swimming on or through a body of water while equipped with a diving mask, a shaped breathing tube called a snorkel, and usually swimfins. In cooler waters, a wetsuit may also be worn. Use of this equipment allows the snorkeler to observe underwater attractions for extended periods with relatively little effort and to breathe while face-down at the surface. 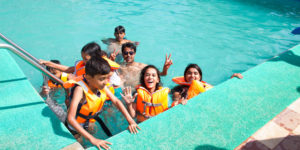 Train Under a Swim Coach 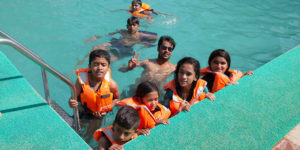 We have hired the services of a swimming coach to train you the right techniques that will help you understand and swim the most right, efficient, and effective of ways. Training under a coach is the most apt way of learning swimming as only a coach can observe and point out your mistakes, and gets you to correct them before it becomes a habit. Trust in the coach to turn you into a good swimmer.

Train Hard To Be A Champ

Based on your ambitions to turn into a professional swimmer, we have our pool at your service for the entire of the year. We can work out a deal on the swimming pool rental, and you can hit the waters and train hard. Who knows we may have an Olympian in the works!